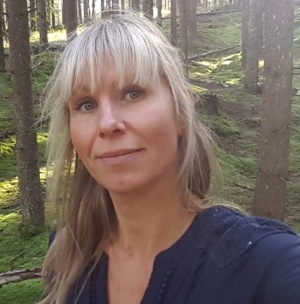 Frida Widlund deeply studies the spiritual power and great gifts of the Norse Gods. She is an Artist and Shamanic Healer living in Denmark.

As an artist, Frida has produced beautiful pictures of these Gods and Goddesses.

You can see Frida Widlund’s wonderful Norse spiritual art for sale worldwide online at The Druid Forest School based in Ireland:

Odin has many faces and many names. Odin, Wod, Wodin, Wotan to name a few.

His main title is The All Father. The Indo-European root form of his name means inspired, furious, mad with ecstasy.

A somewhat fearsome character at a first glance perhaps.

When I was working with Michael Conneely’s Odin courses, I got to know this god character a lot better and soon realized just how complex he really is. A fascinating, exiting and inspiring force indeed.

Remember though, this is how I perceived him, and it might just be a version of Odin only in my personally imaginary world. Who knows.

For me he came through as a boundlessly inspired and passionate man.

It’s all or nothing and full speed ahead that counts.

Equipped with an iron will forged from the finest steel, that would be clearly visible without him ever having to utter a single word. His whole being just oozing out strength, will and enlightenment earthly wisdom. His eyes might even be glowing due to his inner fire.

Now read about Frida’s insights into the Divine Nature of Young Odin, that inspired her Art:

As a young man, this vehemence could lead to a rather hefty rampage where both humans and gods that came in his way, easily could get hurt unless they carefully considered their words and actions in his presence.

Perhaps he was more like an ordinary human in the beginning and later reached a more enlightened state as he eventually became Odin the Avatar. A more mature Odin, who saw as his life purpose to lead and help his fellow gods and simultaneously act as an archetype of strength, will, and wisdom, for mortals regardless of time and space. The All father!

My young Odin, expressed in my picture of him, is a beautiful and strong man with a somewhat restrained charisma.

He may seem thoughtful but is rather calculating. Predominately with his own best interest in mind. The forethought that he seems to possess and that will be one of his finest qualities eventually, are still undergoing some refinement at this stage. Perhaps because he hasn’t yet started using the magical properties of the ravens, thought and memory.

Odin’s impulsiveness and impatience make his actions too often precede his thoughts. For Odin as for young people in general, his youth consisted mostly of gathering experiences from all kinds of choices he had to make daily.

Here, in my picture, is Young Odin with his ravens Hugin and Munin. At this moment in time, they are more or less ordinary ravens. Always around Odin though, being faithfully attached to him, but still exudes that they are raptors, part of wilderness more than organized culture and still less of the magical ravens that they will be known as.

Odin himself still has much to learn and he has not yet have met Freya!

Great goddess Freya of the Vanir people and the one who taught him Seidr, a form of very powerful witchcraft.

But not only that, she taught him to be in contact with his whole being!

She showed him the parts are part of the whole.

The parts consist of opposites equally as important and to treat them as such are key to get access to one’s full potential as a powerful invincible being.

She helped him to find balance between thought and feeling, masculine and feminine, softness and strength, dark and light.

She helped him to become the one he eventually became. A master, a balanced, mature and wise All father.

Watch out for Frida Widlund’s Pt 2 post: Odin The Elder.

You can see Frida Widlund’s art for sale worldwide online at The Druid Forest School based in Ireland: Young Odin:
https://druidforestschool.com/art/

The Druid Forest School’s Courses to meet the Gods and Goddesses of the Norse and the Ancient Irish, plus studying the Sacred Alphabets of the Norse and Irish are taught by Lia Cruse from Florida and can be seen at:
https://druidforestschool.com/courses/

See the novel Rune Magic by Michael Conneely available in Kindle on Amazon.